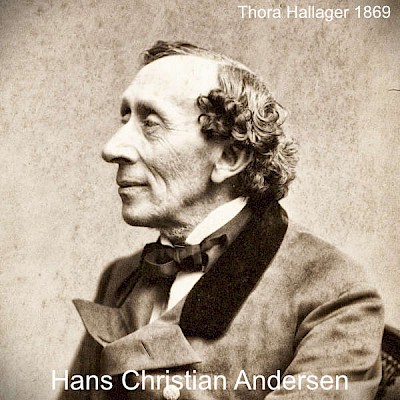 When I look at the photo of Hans Christian Andersen taken by Thora Hallager in 1869, two things strike me. Firstly, he doesn't look like Danny Kaye, and secondly, that is one impressive nose!

And obviously it was a nose for a good tale, as H.C. Andersen wrote some of the best.

When he was young, he lived a fairly poor life. Born in Odense, Denmark, he first came across stories in his father's copy of The Arabian Nights and then from older female inmates at the workhouse Odense Hospital who told him their old folk tales.

H.C. left Odense when still in his teens and moved to Copenhagen. He had loved the theatre in Odense and wanted to seek his fortune in the bigger theatre in the capital. He tried acting, singing, ballet dancing, and play writing, and failed at them all! The director of the Royal Danish Theatre eventually pushed him off to school in Slagelse. He even got the king to pay towards the boy's education. A fairy tale in itself, perhaps!

He was published his first story, "The Ghost at Palnatoke's Grave" in 1822 while still at school and this really set him on the path of becoming such a great writer.

H.C. loved the works of Charles Dickens, and the two had a great respect for each other, meeting several times. But it went a little wrong after he visited Dickens at his home in Gads Hill Place and stayed for five weeks!  He was eventually asked to leave and the relationship crumbled after that.

He was an complicated person, by all accounts, with a habit of falling for women who were not interested in returning his affections.

H.C's reputation as an author grew, and by the 1840s his fame had extended beyond Denmark to the UK and the US. And he has been with us ever since. His stories of The Ugly Ducking, The Emperor's New Clothes, The Little Mermaid, The Princess and the Pea and so many more will live on in film, theatre, art, and of course, podcasts!

I have no doubt about it.