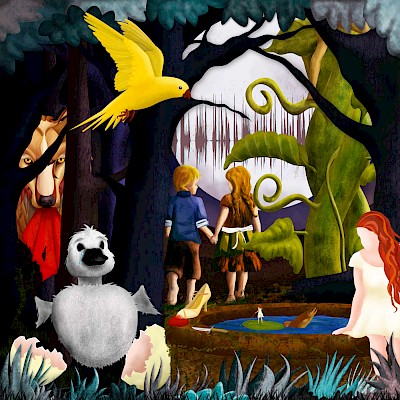 The Story So Far

I started this podcast on a bit of a whim - I admit that.

I had a couple of weeks where I was waiting for scripts and other bits from clients, and I had been thinking of doing a podcast for some time. But if I was going to start one, what would I do?

I had already discarded ideas that revolved around sitting in front of the mic and shoving my random opinions on the world.  There are thousands of those and they certainly have a place, but who would be interested in my opinion? I am not always sure I am interested myself!

But stories are another matter. People need stories.

So, I decided to do a story podcast.  But it would be on my own terms.  The adaptations would be respectful of the originals, but would be tailored to my style. I would write original stories too, tipping my hat to those tales of old.  All the artwork (dangerously) would be original, as would the music.

I am certainly enjoying it, though it is challenging.  The artwork especially has been a battle. I am not an artist and I find this very hard.  I am working on Affinity Designer doing vector graphics with pixel textures and shading. That keeps things a bit more controlled. Some are a little abstract, for instance the faceless character sitting on the well for Gold-Tree and Silver-Tree.

A couple I am really proud of - the three most recent. I think my wolf has a lot to say for himself, and the beanstalk was complicated but fun.

My ugly duckling has a lot of personality.  I have based him on a photo of a real signet I came across.  Well, his head.

I am learning quickly. For instance, I am doing individual artwork for each episode, but I noticed that the text and the image were making it confusing in such a small thumbnail (on some services). So, I have removed the text now and made the main image bigger.

It looks a lot cleaner, and it always appears next to the name of the podcast anyway.

When I started, I was determined to keep to the originals as much as possible. But I soon ran into a problem.

Some of the stories are nearly unreadable. They are often translations, many translated a hundred or more years ago, and were translated by academics who probably had never performed out loud.

So, bit by bit, I have found myself being more aggressive with the adaptations.  I am sticking with the stories still, but I am only sticking to the original wording where it is particularly nice.

This also opens me up to more stories.  Several I want to do are a bit short.  Hansel and Gretel was one of those. But with me allowing myself more latitude, I can pad them out, add nice characterisations, the odd comment, and generally give the stories more body.

There is precedent here! Many of these stories are far older than the so-called "originals" I am using, and have been adapted in countless ways already.

For the moment, I am carrying on as I am, trying to create a body of work using well-known tales.  I will do a couple of my own (one coming in the next episode), but I want to build my listeners - you lot!

Once I do, I will feel more confident in introducing more stories from less well known sources and some from new writers too.

And I think I will probably get braver with my adaptations.

There is a good reason for this.  I am recording the stories in a very specific way. I am making sure they meet Audible specs (I also record audiobooks, in case you didn't know.)  So, if this really does work, I will curate selected stories into an audiobook and a paperback/ebook to bring in new listeners and to promote the art of storytelling.