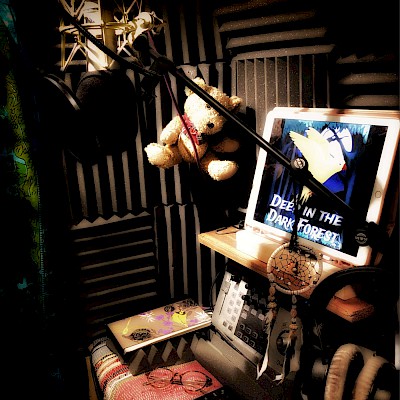 Deciding to record a podcast is one thing, but working out where you are going to record is another thing entirely.

As a narrator, I already have a studio and a voice booth, and to be honest that will be my first choice.  I know the sound is good in there, I have great equipment, and, most importantly, I am comfortable in there.  I have to be because when I am recording an audiobook, I can spend a lot of time in that little booth!

But I do want to vary a bit.

Some of this will depend on the weather.  For instance, I quite fancy recording outside, but I am not so keen if it is -5C and pouring with rain.  However, in the summer, I can see myself sitting on the patio recording away.

I will have to watch (listen?) out for planes and such, and the odd passing car.  Not that I mind them in the recording, but if I have to edit halfway through a plane passing overhead, the plane will suddenly vanish, which will be nasty.  Retakes are less easy too.  If the wind comes up, I suddenly can't pop back outside to retake a couple of words in the story - it won't match.

The final recording must have transparent editing - that means it must sound like I did it in one take even if it took me a hundred!  If it doesn't, then it is most unpleasant for you listeners.

I think sometimes I will mix and match.  So the chatty bits of the podcast might be recorded by a firepit at night with the odd owl in the background and the happy cracking of the fire.  But the story would be recorded in the booth where everything is a bit more controlled.

In the studio I record onto Cubase Pro 10.5 (currently) via a large Focusrite Clarett interface.  That is overkill for most podcasting, but I am also a composer.  However, if anyone is getting into this seriously, I do recommend Cubase, even the Artist version.

If you are going to edit properly, then software like Audacity is really unsuitable, which is why serious studios don't use it.  It records fine and you can edit very well on it, but it creates single fire and every time you drop back into record just adds onto the file.

Systems like Cubase are multi track systems.  The record direct to disk and everytime you hit record, they create a new file.  So your final recording is (without you knowing) made up of lots of files.

This means that when you edit, you haven't lost anything.  You have actually recorded over things.  So if you want the breath from your previous take, it is layered underneath and can be easily used.

Anyway, enough of Cubase.  My main mic is a Neumann U87ai, with a couple of TLM103s as secondary mics.  The U87 is the industry-standard voice mic.  It works brilliantly with ANY kind of voice and can take a lot of punishment.  My current model is only a few years old, but in my last studio, we were using ones that were 20 and 30 years old and they still sounded wonderful.  For radio and podcasting, the TLMs are probably the more common Neumann used - they are a third of the price and are smaller.

I also have a Blue ball mic, which is really nice (recommend that if you are going cheaper), and a couple of oddments which I used for music.

I like my Beyerdynamic headphones.  I have three sets. Custom Studio which live in my shed for when I am working out there and don't want to disturb the neighbours.  I use DT 770 PRO in the booth because they are closed backed and comfy. And I have DT 990 PRO for editing because they sound nice, are comfy, but are open backed so I have some chance of hearing the world outside!

Other bits? A HUGE 34" curvy monitor plus a custom controller for macros to make the editing super quick and good.

I also use iZotope RX7 standard to help get rid of clicks and rubbish I spit out mid flow.  If I start recording outside, that will be used a lot more I reckon.

The Shed and the Garden

My art shed is definitely a place I will be recording at least some bits.  It is not soundproofed of acoustically streeted, but it is a nice environment with a distinct sound.  It will be perfect for some recordings.

Because we are in a tiny village with a big garden, I will record some outside in the summer.  But if this goes well, I might also invest in a small portable recorder and perhaps record some bits in the hills and forests - it would kind of make sense, given the name of the podcast!

The downside is that there will a lot more editing, so some of this will be dependant on how much of my normal voice and music work I have ongoing. Not to forget that I am also a writer.

But whatever I end up doing, I am looking forward to this.  I don't have to please a client, only my listeners, which means I can have a lot of fun in my little world.